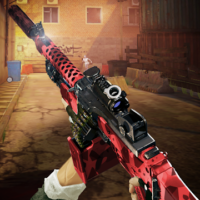 This is an explosive third-person action game based on a zombie apocalypse. According to the plot of the game, a secret and very dangerous vaccine was tested in one of the scientific laboratories. The consequences turned out to be unpredictable, and most people were infected with a terrible virus that later broke out and infected almost the entire metropolis.You have to play as a well armed and trained soldier capable of single-handedly withstanding the whole Walking Dead army.

* Create and customize your area

* Lots of zombies in different regions

There is nothing more exciting than shooting in beautiful zombie games. And if you’re looking for shooting games to play anytime and anywhere, without the internet, without paying to win, why don’t try our ZOMBIE HUNTER – Offline Games?

ZOMBIE HUNTER – Offline Games is another combination between Dead zombie shooting & Apocalypse, except that you will shoot zombies offline through really challenging game matches. Thus, in the beginning, you might feel it’s kind of similar to some zombie shooting games. Don’t worry, it is much simpler but only better! Shooting zombies into the dead is all you need to do if you want to live among the walking zombies by daylight. Play campaigns, aim targets, and fire to prove that you are the most excellent zombie hunter in offline shooting games.

This intense game is easy to learn to play. You will have fun for hours with endless shooting mode to train your skills as a zombie hunter on a variety of dead targets and mad zombies. Zombie hunter is a fearless shooting hero.

WIDE RANGE OF ZOMBIE TO DISCOVER
The zombie virus is unpredictable and dangerous. Fat zombies, jumping zombies, mad zombies, and toxic unkilled zombies are everywhere, there’s no place to hide. In ZOMBIE HUNTER – Offline Games, there’re zombies that can crawl on the floor and the ceiling. They can come to you at any time. So, be aware! The main rule of surviving in this world is shooting all zombies till the last day on the planet!

LESS FRUSTRATION WITH OFFLINE GAMES
Most zombie shooting games require wifi or an internet connection to play. But when you decide to download offline shooting games, you might soon be disappointed with their low-quality graphics. Don’t mind, Zombie Hunter – Offline Games is at your service! This zombie game is a great time killer game for your phone or tablet. With super nice graphics and cutting-edge android technology, it will surprise you with shooting effects that are realistic and stunning in different gameplays. Save more data and play offline games!

BROAD VARIETY OF GUNS AT YOUR SERVICE
Zombie Hunter is one of the top zombie games that have diversity in weapon systems such as sniper, cyber gun, pistol gun, bow, machine gun, and more. Grab guns, keep a finger on the trigger, and shoot to protect your life in this addictive offline game. Killing is no more difficult in these offline shooting games. This zombie game gives you a cyber environment to use different shooting tactics in an open world of zombies! Kill zombies with a single trigger and stay alive! Unlock an arsenal of zombie shooting weapons such as machine guns and drones!

BUILD AND UPGRADE YOUR SHELTER
Hunters also need to build their shelters to ensure that they can survive through the world war zombie’s tough time. A shelter is a place that can provide you with stuff that is crucial to join shooting campaigns and fight against zombie raids! Death is coming to humans no matter by daylight or night, and no one can assure your life.

Download Zombie Hunter – Offline Games now! Get this fun offline game for FREE and ready to kill all the dead targets. If you want to socialize with other players in-game, don’t hesitate to join Leaderboard (online mode) and gain amazing rewards. A lot of awesome zombie shooting matches are waiting for you, so play now and explore all the great features this offline game has to offer. Enjoy as offline shooting games for free are the most fun games to play!