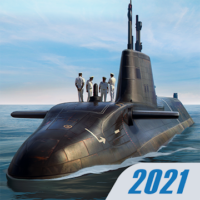 WORLD of SUMBARINES allows players to experience battles in the ocean with modern submarines with various weapons. The number of submarines is varied and can be upgraded with blueprints of different rarity to gain support stats and skills. In WORLD of SUBMARINES, players will find the underwater battles interesting but equally challenging. The main vehicle you will use to defeat other players in the submarine. So there will be some factors that will be different from battles on land or at sea that you will need to adapt, such as how to control your submarine. Moreover, you will be amazed by the unique underwater environments. Once you have completed the WORLD of SUBMARINES tutorial mode, you will start with the game modes. The main game mode that you will often play is a quick match where you will participate in 4vs.

Naval battles with modern submarines with realistic and unique controls that you will spend time mastering.
You will be able to quickly locate enemies at a certain distance and deliberately move under the vast space of the seabed.
Each submarine is equipped with a few weapons that you will need to aim and use correctly to take down your enemies.
Different game modes bring different experiences to players when the focus of the game screen is slightly changed.
The number of submarines you can find appears when you reach a certain level, and blueprints help upgrade its main parts

Dive into the deep sea with the FREE online naval wargame ⚓World Of Submarines⚓! Be captain of a real submarine in tactical combat against players from all over the world in dynamic underwater PvP war game.

Gather legendary u-boats of USSR, Russia, China, UK, USA and others to raise a war fleet. Upgrade armor, speed and firepower of submarine. Get the best tactical weapons, suitable for different marine battles and become a champion navy fighter of underwater simulator.

Sink players’ sub warships and control arenas in PvP game modes or fight enemies’ armadas in Survival. Show honor in navy world and fight through the marine ranks to admiral of u-boat! Explore underwater areas of arctic wastelands, canyons, abyss, sunken temples to get tactical advantage and prepare an ambush.

Warfare in events, tactical missions and challenges to get resources in the game. Dominate the sea!

Alliance and fight with captains from all over the world. Prove your strength in sub marine ship battle!

ðŸ’£Various game modes
Sink enemies in team combat, take control of naval areas, blitz through armadas in PvE events or battle in campaign missions. Choose your tactics – blitz and destroy everything with rain of torpedoes like a tank or use ambush to sink enemies!

ðŸ’£Breathtaking graphics and locations
Enjoy every second in the game with realistic graphics, stunning visual, detailed U-Boats and locations! You can change graphic settings to improve visuals or performance of wargame.

ðŸ’£Comfortable controls
Intuitive controls, auto pilot and auto firing adjustable features will let you blitz into action. But you will need skills to become a champion of the simulator!

Ready to fight in the warfare simulator? Regular updates and new content are waiting for fighters in online marine action of 2022.

Not sure what game to play? Choose⚓World of Submarines⚓ warship PvP wargame

Note:
Dear users! Please write to us if you find bugs or issues in the naval wargame.