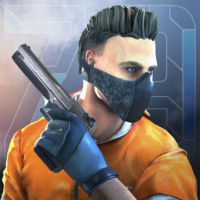 The game is a new version of the most popular first-person shooter series for mobile devices. The second part of the game creates a lot of expectations, so when the game launched, the game has been downloaded more than 50 million times so far. Everyone viewed countless reviews and positive comments about the game, the game as CS: GO on mobile. Maybe because of the upgrades in terms of graphics, weapons, levels, gameplay and many other new things. The game promises a lot of exciting things that are waiting for everyone.

* Adjustment of the HUD and crosshairs

The legendary “Standoff” is back in the form of a dynamic first-person shooter!
New maps, new types of weapons, new game modes are waiting for you in ths incredible action game, where terrorists and special forces going to engage the battle not for life, but to death.

The game is at the beta-testing stage at this moment:
– 6 maps
– 3 game modes (“Deathmatch”, “Defuse the bomb”, “Arms race”)
– Friends
– Lobbies
– Messaging
– Trades between players
– HUD and crosshair customization
– Text chat
– A lot of fun!

Pretty soon Furious Case and Furious Box will be unavailable for purchase with the beginning of the Season 3. So we’re launching a new special offer – three Furious Cases for the price of two.