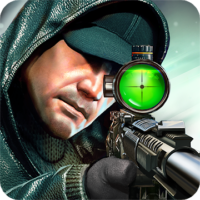 Shooter in which the user works as a sniper on a top secret unit. The main character deals with the extermination of terrorists from various gangs. The main location here are the streets of the big cities. To eliminate the target, the player must aim accurately and shoot in time. We have to act quickly, because the specifics of the landscape give a little time to prepare, so the players have to assess the situation immediately and get their work done.

* Hundreds of different weapons to choose from (including sniper rifles, assault rifles, shotguns, and machine guns)

Intercept, eliminate and extract. It’s time to hone your shooting skills and orchestrate the perfect assassination.

The time for diplomacy is gone. The time for drastic action is today. As a covert special ops soldier, you need to carefully scout each location, unravel the intricately woven level design, and then strike with impeccable timing. Aim your gun and shoot to kill now!