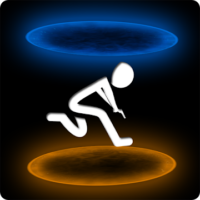 is a pretty good clone of the cult ego puzzle game. Also, a unique gadget is available to players that creates portals and then finds themselves in a number of locked locations. Where to use their ingenuity, the laws of physics, and moving through portals to find ways to overcome obstacles. Good graphics in the style of the original, long duration, realistic behavior of objects depending on the situation and other features will inspire everyone who misses the exciting entertainment with the need to strain their brain.

* Survival in a Stelar Aperture Science: The Other portal 2 Vortex Gun

* A portal without mods, original and with zombie mini-games

Other Portal App is a maze first person shooter and also a logic game created for one or two players offline and online. The game consists mainly of a series of puzzles that must be solved by teleporting the character and simple objects using the 3d gun, calle “plazed jumper”, a device that can create insterspacial portals between two circles flat surfaces.

The most important character, I mean: you, must beat the artificial intelligence called Maze. You can scape completing each puzzle. How? using the portal weapon 2 , the clone gun, to complete all the puzzles.

This is an unique physics game based on an action-adventure game. You will teleport yourself through the portals. Are you ready to complete all the levels and save the world?

Rules of the game: Create 2 portal bridges to complete the levels

The game mechanic system is centered on the jumper 3d, a handheld device that creates bridge portals on flat surfaces, allowing you the power of an instantaneous teleport travels dimensions. Love a visual and physical connection adventure between any 2 points in three-dimensional space.

If two 2d portals are created by the jumper, that means that are linked together in different planes with strange effects on geometry and gravity, you will not regret it.

Advance in the game learning how to use the particular effects of having two portals linking, control the areas where gravity works differently in that dimensions to take your own advantage.

The way the portals work, they retain the inertia of the objects that pass through them, but change the direction of their trajectory according to the surface on which they are placed.

In this way, a free fall movement can be transformed into a parabolic or horizontal throw, or any other combination that you need to pass the level.

Thanks to this, challenges often require imaginative movements to cross long distances transforming a fall into a parabolic launch and reach impossible heights or combining falls into vertical launches.

Survival in a Stelar Aperture Science: The Other portal 2 Vortex Gun

Easy, overcoming a puzzle challenge, using craft dimensions portals in this offline adventure and platform game. In the first levels, we will learn some logic challenges necesary to complete the next puzzle levels.

Only 2 portals can be kept open at the same time. If a new bridge portal is created, constructions, which will replace the previously opened gun portal of the same color.

Be creative to solve the puzzles, find a way to get to the next level. Take advantage of the 3d Portal Puzzle gadgets (portals, push buttons, repulsion buttons, jump plates, buckets and much more) uses the cubes to overcome sentry towers, acid ponds and laser barriers, solve complicated puzzles and get through the test chambers safely.

Double the space time and defy all the laws of physics to overcome this science fiction challenge in Portal 2 Gun!

Build the portals wherever you want and easily teleport yourself to complete each level. Each jump chase portal has a color, you can enter any one and exit the other portal. Can you defeat the clone army?

One portal is orange, the other is blue (and you can change their colors!). Both are connected in the 4th dimension, so you can travel between them.

A portal without Mods, original and with zombie mini-games

Solve a series of puzzles using a special weapon to teleport you between constructed portals and earn points to customize the portals, your weapons.

The Hero Zombie Portal Virus MOD: Use your special weapon to eliminate the zombie orbs that have ridden through humanity, you won’t need to create a portal between places and travel through them. You will have only one portal, to which you will go to a mincer, it is tremendously addictive.

Are you ready for the Other Portal 2?