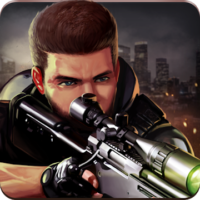 High quality and dynamic shooting gallery with excellent graphics and storyline, in which you have to act as a sniper, on whose shoulders lies a difficult task of destroying the forces of evil across the planet. In general, Modern Sniper is a classic shooting gallery, but the developers have implemented a number of interesting game solutions, so the whole story is divided into more than a hundred missions, each of which is implemented in a specific location, with an impressive arsenal that will further develop your skills.

* Over 50 crime shooter missions to complete

* 7 different real-world weapons to choose from and upgrade

Aim and Shoot! Modern Sniper is #1 first person shooter game that will blown you away!

An over-the-top shooter in every sense, Modern Sniper takes you on a whirlwind tour of the criminal underworld. You are a modern sniper ready to play your part in dangerous attacks and silent assassin missions. Eliminate a mob of enemies at street level or take out the single high-profile target. With access to an inventory of sniper rifles and assault rifles, you will rely on your marksman skills to finish the work.