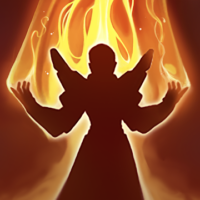 an RPG project in which players become brave characters with a very important mission. The future of the entire fantasy world, in which a conflict of noble proportions takes place, depends on their success. Undead and orcs on one side. All the rest is on the other. And these “everyone else” urgently needs to find a solution for the current situation. So the king sent our hero on a journey to find the great warriors and assemble a cool force from them. And then it hit the heart of the enemy.

* Research the ancient knowledge in the library

* Trade with the exotic trader

Firestone idle rpg: hero wars is set in the fantasy world of Alandria, where Undead and Orc forces have gathered again to bring chaos and disorder to the realm. This time, they possess the great power of the Firestones. The King has trusted you to assemble a party of heroes in order to stop them, reclaim the Firestones and save the kingdom.

Heroes
Heroes are the champions of the realm. They are separated in Classes (Warrior, Mage, Priest, Druid etc) and Specializations (Damage dealer, Tank and Healer). Each hero has unique battle abilities that can be activated by using the hero resource (Mana, Rage or Energy). These abilities can be activated either by active playing or in an idle way by getting the appropriate hero talent. Each hero has a unique mythical background story that you will love reading as you dive into the world of Alandria.

Party and Battle Formation
Like in all classic rpg games you can assemble a party of 5 heroes to fight for you. In the party you need to deploy the best heroes and classes as the battle formation of your party is essential to ensure victory. The battle continues even when you are offline or afk. You just need to set the right formation and then you can relax seeing your mythic heroes bring the war to the enemy stronghold and then you can reap the rewards!

Gear
What separates heroes from mythic heroes is their gear! Find and equip your heroes with the best gear. Upgrade its rarity and enchant it to make it more powerful.

Guardians
Guardians are divine creatures. While heroes can fight on their own in an idle rpg way guardians are angels and dragons that only you can control. They need you in order to destroy the enemies! Unlock guardians and evolve them so they can reveal their true power.

Awakening
Awakening is a very cool mechanism that you use the mystical power of the arcane crystals to empower your squad and prepare it for the hero wars!

Map
Let the hero wars go on and handle the more strategic decisions. Send your squads into multiple types of missions and claim unique mythical rewards as you free the land of the evil forces.

Town
At the town there are several buildings, each one is a unique mechanism that you can unlock to expand your gameplay. The Engineer, the Alchemist, the Tavern, the Library and the Magic Quarters are just a few of them.

Guild and Fellowships
Fighting legendary battles in this afk rpg game is more fun when you are not alone! Join a guild and/or a fellowship and become stronger with the help of your guild / fellowship mates! Remember, mythic heroes never venture alone!

More Info
Firestone is a game that belongs to the “idel rpg” genre or “afk rpg” as some like to call it due to the non-stop hero wars. Even when you do not play the game your heroes continue fighting an endless idle rpg battle and you collect the rewards as offline earnings when you open the game again. You just have to come online, do wise decisions about your mythic heroes and let them to the work for you. Moreover, in the game you join or create a guild with other people for mutual benefits. Also you can create fellowships with them to fight the idle rpg battle together.

+ New Hero: Randal has been added to the heroes, you can unlock him after Sely! + Daily Rewards: Revised the daily rewards and replaced void crystals with expedition tokens. + Quests: Recreated the daily and weekly quests from scratch. New quests with new types of rewards and a menu redesign.
What's new?
Version 5.0.5
What’s New: