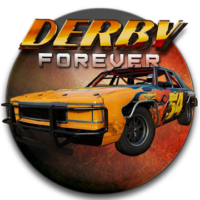 You are ready for a crazy ride, then go to the track and for the sake of victory smash to pieces of metal, the cars of your opponents!

This modern racing game, created in the best traditions of the genre, with cutting edge graphics will delight you with ultra, realistic physics of the behavior of cars on the track and a system of damage and will be able to surprise the most demanding players.

There are many modes in the game, from playing with artificial intelligence, to the possibility of creating tournaments, in huge arenas and races for elimination from the track, in which you can invite your friends or play with unfamiliar players. Win tournaments and races destroying opponents, earn experience points for which you can open new maps, buy cars and improve them using flexible tuning settings.
Features:
– Huge selection of cool cars, with the ability to improve to suit your style of play

– 14 arenas
– Ultra realistic graphics and physics of cars, with an amazing damage system
– Ability to play online with friends.

Become the winner in epically insane battles in giant arenas leaving burning piles of metal from your opponents.