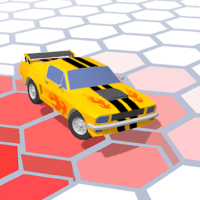 a highly dynamic racing project in which players will literally survive drifting. You will have to fight for the title of the only one at the location with many other participants. When moving on a surface made of hexahedral honeycomb, the affected tiles are wiped off behind it. And then disappear and leave a void. Where it is easy and simple to fall with imprecise maneuvers. Given the chaos in the arena, you should be extremely careful, skillfully maneuver between opponents, destroying the path in front of them and trying not to fall into a trap yourself.

Race off, enter the arena and start drifting!

Cars Arena is a 3D physics-based PvP drifting game where you and your racing rivals compete for space on the platform.

How’s that? Every car leaves a trace behind that makes platform tiles disappear. One wrong turn and you’re out of the racing game!

Control your ride and drift by moving a finger across the screen. Knock your racing rivals out of the arena to be the last one standing.

Be careful and do not fall! Your racing opponents are the tricky smashers trying to kick you off the io arena. Ride fast and be first to attack!

How to jump a racing car? Easy! Tap on the screen to make your car jump and fly over other players or holes in the hex arena.

Don’t let the difficulties scare you – have fun, race with your enemies and become the coolest rider in the arena!

Drifting and aggressive driving are the only ways to win this car racing. Don’t hesitate to hit the gas and smash other players. Noone can catch you ridin’ dirty!

What are you waiting for? Join now and show your opponents who is the drift champion here!

Drift for the sake of speed and survival! Come on and put your foot down to become a real racing king!