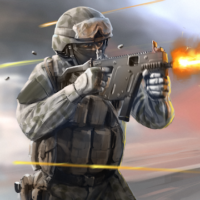 is a first-person shooter for Android devices that focuses on multiplayer battles. The game is largely similar to Counter-Strike. In addition to the classic combat modes between the two warring parties there and the single player campaign in which you have to complete a series of missions, you mainly focus on cleaning up the location of enemies. There is also a quick match mode where you can practice with bots before shooting with real players.
The graphics are well done, but given the clumsy animations of the opponents’ movements, the fuzzy texture and the slightly angular regions on the game map, there are some rough edges. But the sound is pleasingly realistic effects of gunfire and explosions.

* Fight alongside your teammates in a massive 20-player war using a variety of iconic weapons (rifles, pistols, AK-47s, assault rifles).

Fight alongside your teammates in massive 20-player war using a variety of iconic weapons (guns, pistols, AK-47, Assault Rifles,). Be ready to shoot to kill all your enemies in this survival game.

Bullet Force currently features 4 polished game-modes including Team Deathmatch, Conquest, Free-For-All, and Gun Game. In all of them you will be in combat against other players

Bullet Force features a free spectator mode and an option to disable HUD, making the game perfect for all your montage needs.

Don’t have an internet connection? You can still play the game offline with bots in a skirmish and campaign mode.

We hope you enjoy this new multiplayer FPS, see you in the fight.