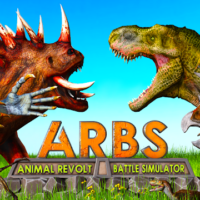 a battle simulator in which players can implement a variety of scenarios, use high quality animated units, as well as use the editor to add really original fighters to their collection and immediately test their skills. Humans, animals, dinosaurs and precisely these hybrids become the main attacking forces of any armies. Well, the range of weapons, from swords and spears to large caliber machine guns, all of this will add to an excellent array of chaos and unpredictability of all possible happenings in the play area.

Animal Revolt Battle Simulator is the ultimate physics-based battle simulator sandbox! Place two opposing armies made of different types of beasts and watch them tear each other apart in an epic battle! As the creatures fight, you can see the limbs bending, necks twisting, and bodies flying around everywhere!

You can even attach weapons to the animals! Put some huge guns, rocket launchers, and crossbows on a T-Rex and watch the havoc it wreaks!

Enjoy ultimate flexibility! Attach as many body parts and weapons as you want, anywhere you want!

You can save your creations for later use!

CAMPAIGN
—————————————————————-
Test your tactical and strategic expertise in the campaign mode. Pick the right beasts, place them in the right place, and command them to defeat the enemy.

The most expensive army doesn’t always win. Units have strengths and weaknesses. Find out what they are and use that knowledge to your advantage on the battlefield!