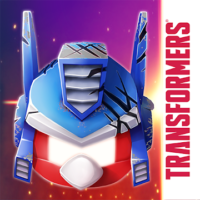 Angry Birds and Transformers, we would think it’s unrelated. Angry Birds are beautiful birds living on tropical islands while Transformers are giant robots from the universe. But with the great creativity of the developer Rovio, they have brought us an fascinating game, a perfect combination between Angry Birds and Transformers.
Angry Birds Transformers is not a match 3 puzzle game or a trajectory shooter game but an arcade and action arcade game. The gameplay of this game is similar to Jetpack Joyride. You control the Angry Birds that run across the screen, collecting gold and shooting blue pigs that fly on the left side of the character. Right. They are no longer small and cute Angry Birds. From now on they are AUTOVIRDS, birds that can transform into a car or a helicopter with advanced weapons. However, AUTOBIRDS cannot protect Piggy Island alone. To stop the Eggbot, they must team up with their enemy DECEPTIHOGS.

Play with one finger

That’s correct. You can play Angry Birds Transformers with just one finger. AUTOBIRDS moves forward automatically, all you have to do is touch the enemies, towers and enemy fortresses to attack. Beware of some stone towers. It will fall on you as you walk through it. Quickly touch the transform button to transform into a car or plane, increasing your speed. Remember, AUTOBIRDS comes in two forms, robot and vehicle.

As an Angry Birds game combined with Transformers, players will naturally be very interested in the character system. And great, the publisher Rovio did it very well. While playing Angry Birds Transformers you will meet well-known characters from the Transformers series like Optimus Prime and BumbleBee in the form of cute Angry Birds (Red, Chuck and Bomb). Also the Decepticons with the form of the blue pigs make an appearance.

There are many things for you to do in this game. Angry Birds Transformers brings players some very interesting modes. In addition to the standard mode, you can try your best in the endless run mode. Here you will experience all the characters you have. When an Autobird dies, another spawns and continues the fight.

* COLLECT! Unlock a roster of heroes (and villains) with unique attacks and abilities!

* DESTROY! Leave the slingshot at home – this time you’ve got SERIOUS firepower!

* UPGRADE! Get stronger weapons and new abilities for each Transformer!

Angry Birds and Transformers collide in this action-packed, 3D shoot ‘em up adventure! The EggSpark has transformed the eggs into crazed robots who are destroying Piggy Island, but who can stop them?! Autobirds, ROLL OUT!

Have you ever seen an alien robot Angry Bird? Enter the AUTOBIRDS! This brave band of heroes features Red as Optimus Prime, Chuck as Bumblebee and… well you’ll meet the rest soon. They’ve got lasers and they turn into cars. Plus they have arms and legs – that’s a first!

But the courageous Autobirds can’t save Piggy Island on their own – to stop the EggBots they’ll need to join forces with their arch rivals the DECEPTIHOGS (like Decepticons only smellier). Can these bitter enemies team up and put aside their differences? Yeah right…

*NOTE: Angry Birds Transformers is completely free to play, but there are optional in-app purchases available.

– COLLECT! Unlock a roster of heroes (and villains) with unique attacks and abilities!

– DESTROY! Leave the slingshot at home – this time you have some SERIOUS firepower!

– UPGRADES! Get stronger weapons and new abilities for every Transformer!

– TELEPODS™! Scan ‘em to unlock, revive or boost your bots!

*NOTE:
A network connection is required for some game features..
————–

Discover the rest of the Angry Birds universe:
https://www.angrybirds.com/

Important message for parents:
– Direct links to social networking websites that are intended for an audience over the age of 13.
– Direct links to the internet that can take players away from the game with the potential to browse any web page.
– Advertising of Rovio products and also products from select partners.
– The option to make in-app purchases. The bill payer should always be consulted beforehand.